Chinese And Russian Navies Circle Japan In “Show Of Force”

Chinese And Russian Navies Circle Japan In “Show Of Force”

In yet another example of the increasingly close alliance between Russia and China, the Chinese Navy and Russia’s Pacific Fleet have been engaging in war game operations, seemingly in tandem around Japan, according to the Japanese Defense Ministry.

Reports of coordinated military exercises have not been officially acknowledged by Russia or China, though Japan continues to post regular updates on ship movements.  The naval exercises were apparently focused around the islands of Miyako and Okinawa, which hold 50,000 US forces, as well as a 70-mile wide corridor between the island of Yonaguni and Taiwan.

While not unheard of, military cooperation in the Pacific between Russia and China has grown in frequency, with naval exercises increasing over the past month.  While Japan calls these movements a “show of force,” they may very well be practice for a conflict planned in the near future. 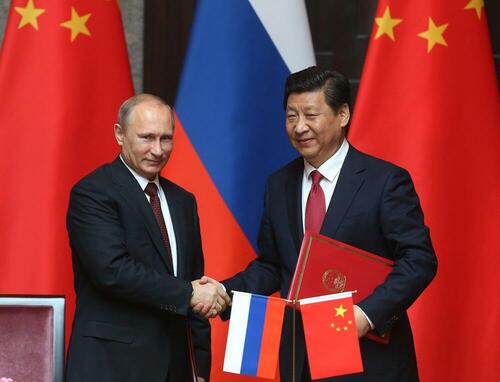 After the recent BRICS summit in Beijing and the reaffirmation of China’s economic support of Russia during its war with Ukraine and NATO sanctions, it only makes sense that the economic relationship would evolve into at least a loose military agreement.  The latest decision on the induction of Sweden and Finland into NATO as well as naval escalation in the South Pacific are only going to drive Eastern interests closer together over time.

China is nursing a compulsive obsession when it comes to absorbing Taiwan into the CCP, and with the West overly focused on Russia and Ukraine, they may act soon.  If an invasion of Taiwan is planned it would have to take place sometime in September/October when weather conditions in the region are favorable to naval operations.  Leaked reports from Russian intel in March seem to indicate that a fall invasion of Taiwan was indeed in the works.  Some believe that the Russian war with Ukraine will force China to scuttle such plans, but there is also a chance that Ukraine will provide excellent cover for an action against Taiwan; forcing western governments to split their efforts and focus on two fronts instead of one.

The bigger question is:  Will Russia and China form an official military alliance?  There is no debate now over their trade alliance, but the notion of military cooperation between the two countries will lead many people to scoff.  Keep in mind, however, that there were numerous skeptics that argued only a week ago that the Turkish government under Erdogen would “never” agree to Finland and Sweden joining NATO, and yet that is exactly what they did.

The geopolitical landscape is changing fast and the old rules no longer seem to apply.