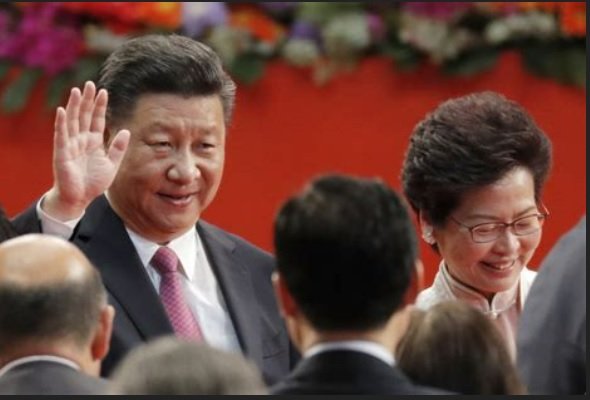 On the 25th anniversary of the UK’s handover of Hong Kong to China, President Xi visited Hong Kong and claimed that after 2-3 years of protests and brutal arrests of protesters and the ending of freedom of the press, this is the beginning of true democracy in Hong Kong.

Every year on this date (July 1) in Hong Kong there were million-person marches protesting China’s takeover of the tiny country.  But not this year.  Protests against China are now forcefully prevented.

After 2-3 years of brutal and violent crackdowns of protesters and COVID mandates, China is now firmly in charge.  This happened while using COVID to silently take away the Hong Kong people’s rights.

The reports of Xi’s arrival were mixed.  Along with Xi came a category 3 typhoon.

Xi teased in his speech that:

There is not a country or region in the world where its citizens would allow those who are not patriotic, or even traitors to get hold of political power”

Was this a reference to China ignoring the rights of the people of Hong Kong and forcefully pushing the China takeover or was this in reference to the Biden regime that appears to be under China’s direction and daily works against the American people?

Chinese President Xi Jinping was in Hong Kong on June 30 and July 1 for celebrations marking the 25th anniversary of the handover and the swearing in of the city’s new leader. pic.twitter.com/WF6uQCVOnd

Others gave reports on Xi’s arrival ignoring talking about the protesters and reporters who have vanished over the past few years.

RT @Quicktake Is Hong Kong turning a page in the 2nd half of the 50-year ‘one country, two systems’ framework?@YvonneManTV explains Xi Jinping’s message and what the 25th anniversary of the handover means for the city’s future with China … pic.twitter.com/ZHK8KXn1yA

The ‘celebrations’ were choreographed as Xi moved the topic from China’s takeover to housing for its citizens.

Massive security is in force as Chinese leader Xi Jinping is set to preside over tightly choreographed celebrations marking the 25th anniversary of Hong Kong’s handover from Britain. Parts of the city have been closed off and media coverage has been tightly restricted. | via AFP pic.twitter.com/e6f3yxiQnp

The post After Destroying Individual Rights, China’s President Xi Arrives at 25th Anniversary of Handover to Claim “Beginning of True Democracy in Hong Kong” appeared first on The Gateway Pundit.