Authored by Joseph M. Hanneman via The Epoch Times (emphasis ours),

An Indiana Oath Keepers leader who was in charge of security operations for the group in Washington on Jan. 6, 2021, was indicted by a federal grand jury on June 24 on five counts related to violence at the U.S. Capitol.

Michael Greene, 39, of Indianapolis, was arrested in Indiana on a warrant from Washington. An indictment unsealed June 24 charges Greene with conspiracy to obstruct an official proceeding, obstruction of an official proceeding (aiding and abetting), conspiracy to prevent an officer from discharging any duties, entering and remaining in a restricted building or grounds, and tampering with documents or proceedings (aiding and abetting).

Greene, who also goes by the name Michael Simmons, is not accused of seditious conspiracy, a charge leveled in a different indictment against nine Oath Keepers, including the group’s founder, Elmer Stewart Rhodes III.

The overarching cases against the Oath Keepers allege the group conspired to prevent the counting of Electoral College votes by a joint session of the U.S. Congress at the Capitol on Jan. 6, 2021. The goal, according to federal prosecutors, was to keep then-President Donald J. Trump in office and prevent Joseph R. Biden Jr. from assuming the presidency.

All of the current 17 Oath Keepers defendants have pleaded not guilty to all charges. Defense attorneys say the indictments are a vast misreading and twisting of communications between group members who came to Washington to do nothing more than keep event participants safe from attacks by Antifa radicals.

“At 1:42 p.m. on January 6, Greene sent a text message to an acquaintance stating, ‘Storming the capital’ (sic) along with a photograph that depicted the advancing mob on the west side of the Capitol grounds,” the Department of Justice stated in a news release. “Greene communicated with Rhodes and others during the afternoon. At about 3:09 p.m., Greene texted an acquaintance, ‘Congress evacuated.’”

Greene’s indictment surprised some case observers, coming nearly 13 months after he was interviewed by FBI agents regarding his participation with the Oath Keepers at events in various cities. As a key leader at the D.C. events on Jan. 6, his input cited in the FBI reports contradicts much of what is alleged against Rhodes and other Oath Keepers defendants.

According to the FBI’s case notes from interviews with Greene on May 4 and May 25, 2021, he told agents there was no Oath Keepers plan to attack the U.S. Capitol. His role on Jan. 6 was to oversee security for speakers at various events at or near the Capitol, he said. Oath Keepers who entered the Capitol building did not do so at his instruction or that of Rhodes, he told agents.

Greene, who was identified in the redacted FBI notes as “Person 10,” told agents his job “was providing VIP security at select stages … where ‘protectees’ would be giving speeches.”

“The security detail encompassed stage security and the protection of those individuals as they returned to their vehicles,” the FBI report said. “Person 10 cited the need for this protection after the Trump rally in December [2020] when individuals had been attacked by Antifa as they were leaving the rally.”

Greene was standing with Rhodes near a downed fence on the northeast side of the Capitol during part of the afternoon of Jan. 6, the report said. “Person 10 learned afterwards OKs had entered the U.S. Capitol, however, advised no plan by the OKs included anyone going inside the U.S. Capitol.”

In his FBI interviews, Greene said the message he sent out stating “they have taken ground at the capital (sic)” was an effort to get the Oath Keepers to regroup and leave the area of the Capitol building. 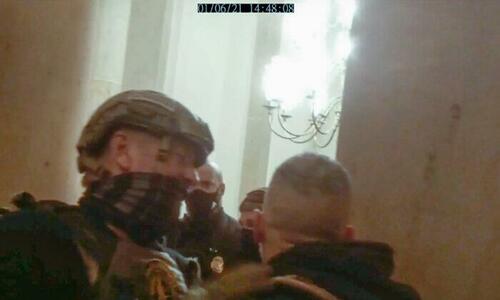 Greene also told FBI agents that no Oath Keepers assaulted any law enforcement personnel or forced their way into the Capitol. “Person 10 heard the door was open and the group walked in,” the FBI report said.

One group of Oath Keepers climbed the east steps of the Capitol below the historic Columbus Doors and went inside the Rotunda. Some of those Oath Keepers intervened in a potentially deadly standoff between a U.S. Capitol Police officer and a group of angry protesters inside the Small House Rotunda, witnesses reported.