We can’t say we’re surprised. It appears that the rising rate environment (read: literally we are still only at 1% rates) has put pressure on investors who paid top dollar for apartments over the past year.

Profits for landlords who have borrowed to buy new apartments and for those who have turned to renting these properties to tenants are starting to come under pressure, according to a new article by the Wall Street Journal.

Tenants may find that their rents are being raised as a result of the financial pressures, too, the report notes. It says that annual volume of rental apartment purchases “almost doubled” between 2019 and 2022 while investors spent $63 billion on apartment buildings.

But it isn’t just rates that are pressuring the buyers – the sheer speed with which prices moved higher also means shrinking returns for owners. Apartment building prices rose 22.4% during this year’s first quarter, the report says. 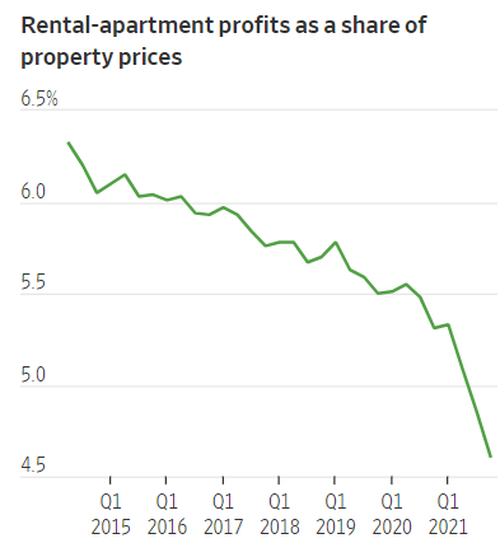 This type of negative leverage for the owners hasn’t been this prominent since the 2008 crisis, the report notes. Nitin Chexal, chief executive of real-estate investment manager Palladius Capital Management, compared today’s environment to 2008, stating: “You’re seeing a lot of the same mistakes.”

However, defaults are not expected to be as prominent as 2008 due to investors having less debt. However, outstanding mortgage debt backed by multifamily buildings has “more than doubled since the financial crisis to $1.8 trillion”.

The Wall Street Journal wrote that “The median asking rent for any rental unit rose to $1,827 in April, according to Realtor.com, the highest rent on record and a nearly 17% gain from the prior year.”

Ron DeSantis on Overturning of Roe v. Wade: ‘The Prayers of Millions Have Been Answered’

Cher Panics: ‘Radical Supreme Court’ Is ‘Responsible for Deaths of Hundreds of Thousands’

Ron DeSantis on Overturning of Roe v. Wade: ‘The Prayers of Millions Have Been Answered’