After an investigation concluded that border patrol agents did not whip migrants or do anything wrong during a confrontation last year, Fox News reporter Peter Doocy asked White House Press Secretary Jen Psaki when Joe Biden intends to apologise for saying he would make them “pay”. 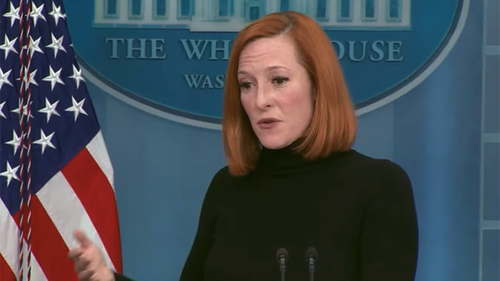 Doocy said “We’ve been told that the mounted Border Patrol officers the President accused of whipping migrants had been notified they will not face criminal charges,” asking Psaki “So when is the President going to apologize to them?”

Completely brushing off the question, Psaki replied “There is a process and an investigation that’s gone through the Department of Homeland Security. I don’t have any update on that.”

Doocy tried to hammer home the point, asserting “The President said that they were whipping people, which would be a criminal offense and they’ve been told they’re not going to be criminally charged.”

Psaki again repeated the same brush off, noting “And there was an investigation into that, and I’ll let the Department of Homeland Security announce any conclusion of that investigation.”

Doocy continued, “You accused these officers of brutal and inappropriate measures now that they’ve been told they will not be criminally charged. Will you apologize?”

Psaki again retreated, stating “And Peter, there was an investigation into their behavior so that investigation is playing out. Whenever there, it’s going to be announced the Department of Homeland Security will announce that and I’m sure we’ll have a comment on it after that.”

As we previously noted, Democrats and leftists in the media spread the fake claims of migrant whipping in order to distract from the unfolding crisis on the border.

DHS Secretary Alejandro Mayorkas said the pictures and footage was “horrifying” proclaiming that they “conjured up the worst elements of our nation’s ongoing battle against systemic racism.”

Sec. Mayorkas says “we saw horrifying images” of Border Patrol horse patrol. He says the images “conjured up the worst elements of our nation’s ongoing battle against systemic racism.”

Yet, even the photographer who took the images chimed in and stated that no ‘whipping’ took place.

“Some of the Haitian men started running, trying to go around the horses,” Paul Ratje said, adding “I’ve never seen them whip anyone… He was swinging it, but it can be misconstrued when you’re looking at the picture.”

After even CNN’s Jake Tapper admitted the insinuation that Border Patrol agents ‘whipped’ migrants was “patently false,” and that pictures of the incident were grossly taken out of context, White House Press Secretary Jen Psaki declared that it didn’t matter and that the administration’s reaction to the incident would not change.

.@PressSec says that the distinction between whipping immigrants and using horse reins does not change the circumstances regarding the investigation and disciplining of border patrol agents.

“Our reaction to the photos has not changed.” pic.twitter.com/a6eAHF7N24

Border agents involved in the incident were suspended, while their colleagues were forced to undergo woke re-education training, all because they were trying to do their jobs properly.

Biden told reporters at the time “I take responsibility. It was horrible to see, to see people treated like they did, with horses nearly running them over. People being strapped. It’s outrageous.”

Referring to the border agents in solved, Biden said “I promise you those people will pay. They will be investigated. There will be consequences.”

ABC’s @KarenTravers: Mayorkas “said he didn’t want to impair the integrity of investigation to the…agents. He said, ‘I will not prejudge the facts.’ Did [Biden] prejudge the facts when he said ‘I promise you those people will pay?’”

CBS’s @StevenPortnoy: “I’m sure that the union officials and lawyers who will be representing these agents are going to wanna know: Is it your view or the White House’s position that what the President said this morning is not legally operative with respect to consequences[?]” pic.twitter.com/u2gaNSSjSI

Of course Biden will never apologise for this and it will be quietly swept under the rug.

His entire presidency is stage managed fakery, from the CGI White House set to the f*cking Easter bunny directing him away from reporters:

Why is the Easter Bunny directing the President of the United States 🥲🥲🥲🥲🥲🥲🥲🥲 pic.twitter.com/9bgXQJ6EXW

Joe Biden quickly interrupted by the Easter Bunny after he starts to comment on #Afghanistan and #Pakistan at the White House #EasterEggRoll 🐰 pic.twitter.com/xLkuyyudDj

Hopping on a zoom call. 🐰 pic.twitter.com/voxLi3lA77