The unionization bug is officially spreading among America’s tech behemoths, with NYC emerging as the epicenter. 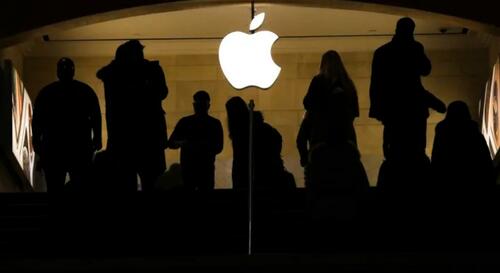 The organizers, who have dubbed themselves the Fruit Stand Workers United, are in the process of collecting signatures from workers, according to a report in the Washington Post.

The organizers, who have dubbed themselves “Fruit Stand Workers United,” say they voted Feb. 21 to affiliate with Workers United, a national labor union that has supported the successful unionization efforts of Starbucks employees around the country, according to the site.

Already, Apple has been mounting stiff resistance with the labor organizers reporting “months” of efforts by the company to dissuade workers from supporting the unionization push.

People involved in the organizing effort told The Washington Post that they have endured months of efforts by Apple to convince employees that unionizing is a bad idea, accusing the company of “union busting” tactics. Now, they are handing out signature cards to would-be union members.

However, if the workers are successful, the Grand Central location would become the first of Apple’s retail stores to successfully unionize. Workers at Grand Central aren’t alone; at least three other Apple retail locations are in the process of forming a union, according to employees who who spoke on the condition of anonymity to keep their jobs.

“Grand Central is an extraordinary store with unique working conditions that make a union necessary to ensure our team has the best possible standards of living in what have proven to be extraordinary times with the ongoing covid-19 pandemic and once-in-a-generation consumer price inflation,” the website says.

Apple has more than 500 retail stores around the world, with more than 270 of them in the US, according to its website.

The company has previously used heavy handed tactics like firing organizers to quash previous worker movements, like the #AppleToo movement, organized by some of its corporate employees (engineers and others). The company fired one of the organizers after accusing them of leaking information from a closed meeting (which the employee denied).

With tech companies already doling out higher wages to corporate employees as competition for talent heats up, could the unionization push create more pressure on labor costs, adding to the growing pressure on the tech sector’s valuation multiples?