Visualizing The Yuxi Circle: The World’s Most Densely Populated Area

Visualizing The Yuxi Circle: The World’s Most Densely Populated Area

If you wanted to capture over 55% of the global population inside a circle with a 4,000km radius, which city would you place at its epicenter?

In 2013, a post appeared on Reddit marking a circular area of the globe with “more people living inside this circle than outside of it.” The circle had a radius of 4,000 km (just under 2,500 miles) and was named the Valeriepieris circle after author Ken Myers’ username.

As Visual Capitalist’s Trixie Pacis details below, acknowledging that the Valeriepieris circle is not actually a circle (it was drawn on a two-dimensional map rather than a globe) and is based on data that has become outdated, mapmaker Alasdair Rae went digging and discovered what he calls The Yuxi Circle, the world’s most densely populated area.

Rae traced circles around 1,500 cities worldwide to find out how many people lived within a 4,000 km radius, just like the original Valeriepieris circle. He based his calculations on WorldPop data from 2020, based on a global population of 7.8 billion people.

Of the 1,500 circles that Rae made calculations for, 148 contained populations of 4 billion or more. He found many examples in Asia including in China, Myanmar (Mandalay), Laos (Vientiane), Bangladesh (Chattogram), India (Agartala), Bhutan (Thimpu), and Vietnam (Hanoi) to name a few.

But of them all, Yuxi, a city in the Yunnan province of China, has the largest population living within a 4,000 km radius: 4.32 billion.

Put another way? The circle encompasses over 55% of the world’s population, despite including desolate areas like the Taklamakan Desert, the Tibetan Plateau, Mongolia, and Southern Siberia. 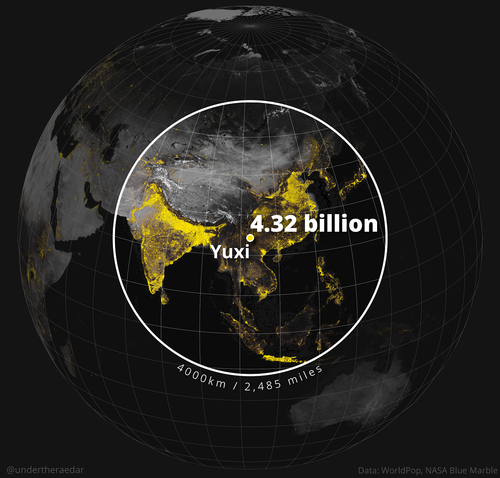 Densely Populated Areas Around the Globe

Note: Keep in mind that the white lines on the flat maps are equidistant circles but will only look like circles when plotted on a globe. 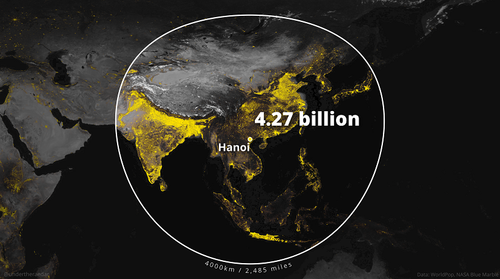 Circling Hanoi yields a population of 4.27 billion (54% of the global population). It was the runner up city circle in Rae’s original search. 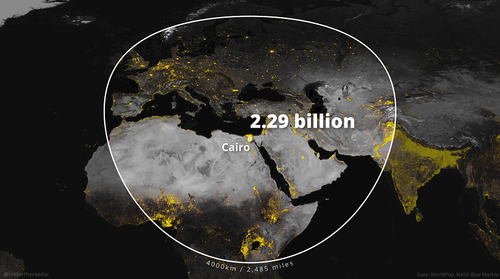 Circling Cairo yields a population of 2.29 billion. This circle reaches most of Europe while still containing populated areas of India, Pakistan, and Africa. 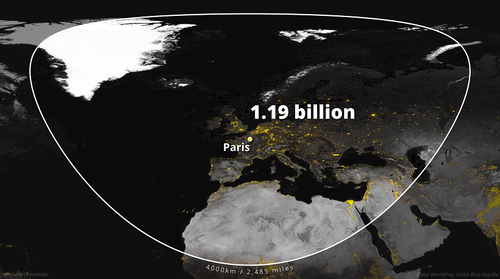 Comparatively, circling Paris yields a population of 1.19 billion. This Euro-centric circle contains large tracts of water and scarcely populated islands such as Iceland and Greenland. 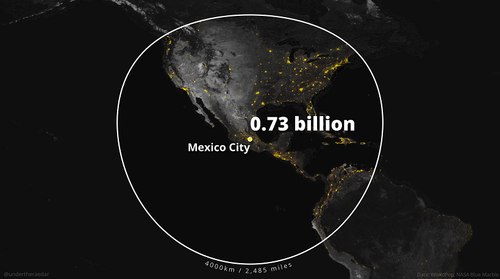 Across the Atlantic, circling Mexico City yields a population of 0.73 billion. It’s significantly smaller than the other circles, as the total population in the Americas is concentrated in just three countries, the U.S., Mexico, and Brazil (not included in this circle).

It’s worth noting that the Valeriepieris circle also inspired other people to look at population density in different ways. In 2015, Danny Quah of the London School of Economics looked more closely at the Valeriepieris circle and was inspired to find the smallest circle with more people living inside of it than outside. He determined that a circle with a radius of 3,300 km centered near Mong Khet, Myanmar was “the world’s tightest cluster of people.”

While the Yuxi Circle contains the largest population using Rae’s approach as of early 2022, global populations are constantly changing. Who knows where the next Yuxi Circle will be?